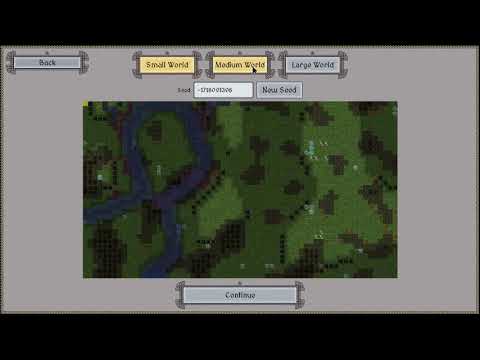 I started this week finishing up the farming tutorial and then spent some time playtesting with a lower zoom level. This means the camera is much further out and you can see more of the world around your clan. I originally chose the camera being closer to the game because I wanted to give a human-level view of the world. I preferred the lower zoom level and I’ve made it the default but allowed zooming in to the original. Let me know your own preference.

From Wednesday evening through Friday I was popping in and out of the A MAZE festival. I wish I’d engaged more and spoken to more people there but I found it inspiring nonetheless. I enjoyed hearing from game developers from a wide variety of cultures and seeing some pretty unusual games. On Thursday evening I was dancing like no-one was watching for about an hour to the amazing Chipzel. On Friday I played through most of the surreal, deliberately discomfiting and sometimes confusing Utopias: Navigating without Coordinates. Hoping to finish it this weekend.

After playtesting for about two hours from Wednesday night into Thursday morning, breaking my routine, I’d added 38 ideas, bugs and thoughts to my Trello board. I acted on two of the shorter ideas; making Dwergs sleep less during the day than at night and clamping the maximum darkness for height. Then I went a little off-piste, updating the new-world screen to show previews of generated worlds, a text-field to enter a seed and logging of all generated worlds. It took all of Thursday to tidy up and refactor so it works in all three places the new-world screen appears. I’d like to add a list of generated worlds with thumbnails so users can re-visit previously generated worlds. This isn’t on the critical path so I’m going to restrain myself.

I went further off-piste over the weekend with the beginnings of a generative grammar. I’ve started writing something to model language starting with ‘a sentence is a noun phrase followed by a verb phrase’ making a phrase a generic class. This is a mighty warren of linguistics that I had the sense to park on a branch on Sunday evening. I also started on a dramatic-moment-observer which will one day detect when something dramatic is happening in the relationships between Dwergs and draw the player’s attention to it.

On Monday I spent half the day figuring out what I want from a writer, putting that in an email and committing to a budget for it. The second half of the day I used the AWS pricing calculator to figure out how much it would cost to run the cloud service with 1500 daily active users playing two, twenty minute sessions, per day ($364/month) and then a per user, per month cost ($0.14/month). This was partly inspired by a desire to put together a “robust business case” for funding applications and I know I’ll need this when I apply for the AWS Founder’s Package.

I finished Monday planning what I’ll be doing for the rest of the week which is mostly choosing material types for building, bug fixes and minor improvements.

Frans has been putting the finishing touches on the music and balancing the sound. This is the last week of Frans’ internship and he’s now available for work as an audio designer in the games industry. I’ve really enjoyed working with Frans, he’s added a huge amount of value to Dwerg Saga and I hope we can work together again in the future. As well as being a talented musician, Frans is proficient in improvising Foley, has a good understanding of the requirements of game audio and is an excellent communicator. If you are looking for an audio designer you can contact Frans through his LinkedIn profile.