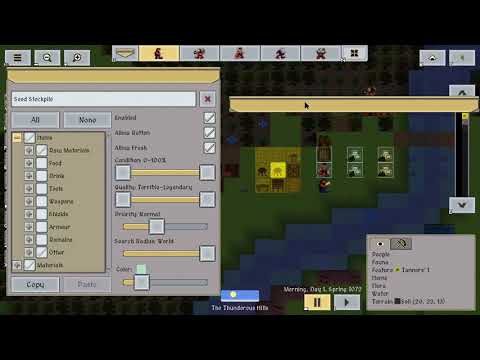 This week I started my contract with Panivox. This is a really interesting product to be working on and I think the world will be pleasantly surprised when it’s released. The company is being run by The Oliver Twins who have an incredibly prolific history of making games since the ’80s. I have an opportunity here to learn a lot from them. I met the rest of the team on Friday and I’m feeling pretty positive.

On Dwerg Saga I’m continuing with the combat system. On Saturday I cleaned out a lot of old tasks from the “Sprint” Trello board and reduced it down to a set of tasks focussed on the combat. The combat system has sprouted arms, legs, tails and tentacles and I’m now chopping appendages off in a desperate attempt to reduce the scope to something that I can release before the end of the year. I’ve made a separate list of all the combat features that don’t need to be in this release. I will review them for a future release.

I was playtesting on Saturday and I got annoyed by the stockpile panel being in the way. The video shows the result, an experiment with traditional window bars where the window collapses when it is pressed and expands when released. Looking at this now I can see moving a window while it is expanded is more useful because one can see where it is going to overlap with other elements. There are other issues but I don’t want to spend too much time on this so I will simply remove the expanding/collapsing behaviour.

On Sunday I did just that but got pulled into tweaking the background image and then fixing the screen-edge scrolling which was unreliable when moving the mouse to the edge of the screen too quickly. In the evening I started work on adding injuries to body-parts.