Gathering what I needed to do this week:

I’ve been to two Creative Bridge sessions so far and I’m finding it to be a good mix of practical exercises and talks where I’m learning new stuff. The course has each group doing a Lean Canvas for a product for the first five weeks. I’m finding this an enjoyable way to learn as it has me thinking about Dwerg Saga from this perspective. My first insight is that learning about oneself can be a difficult experience and people don’t traditionally use games for that. So I’m trying to sell something that nobody wants. If I wrap the vitamins in enough candy I’m sure it’ll be fine.

Self-doubt and low motivation have troubled me this week and I’ve only managed to add the view-modes and refine the tutorial based on recent play-tests. I went off-script earlier this week to do a spike on game-recordings; my thinking was that the game is deterministic so all I need to record is the initial state and the commands that players issue. I want to be able to record games in combination with recording a video of the player so I can better understand what a play-tester is thinking. My spike told me that I should also store cursor and camera positions and state-changing commands from scripts. This is something I’m going to shelve for the moment.

While adding the view-modes and zoom buttons I took some time to play around with the user-interface. This is the current layout: 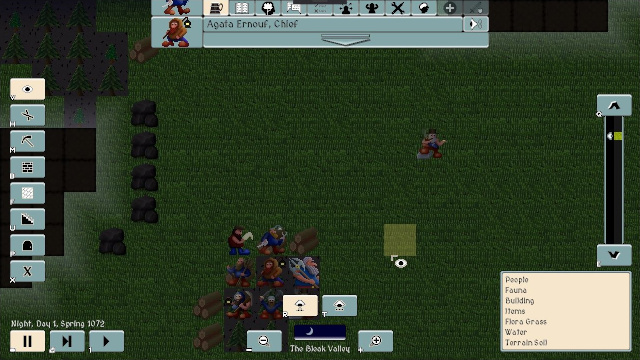 I have four alternatives. The first two present the player’s clan along the top of the screen similar to RimWorld. The details of individual units would need to be incorporated into this. 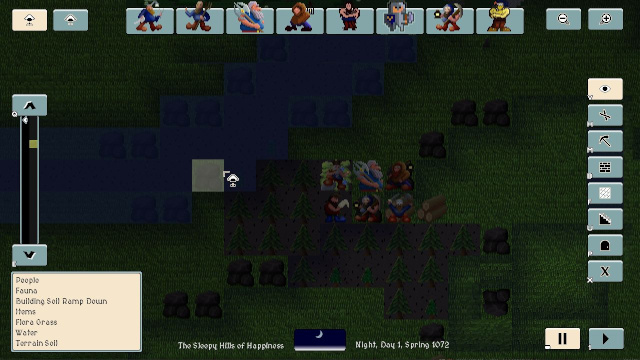 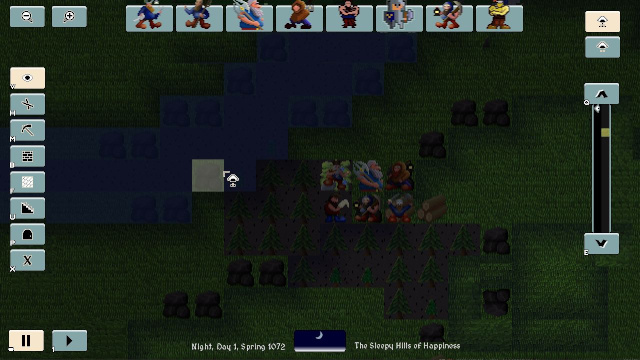 The other two are simply tidying the existing layout, giving more space to the game and removing the unnecessary tick button. 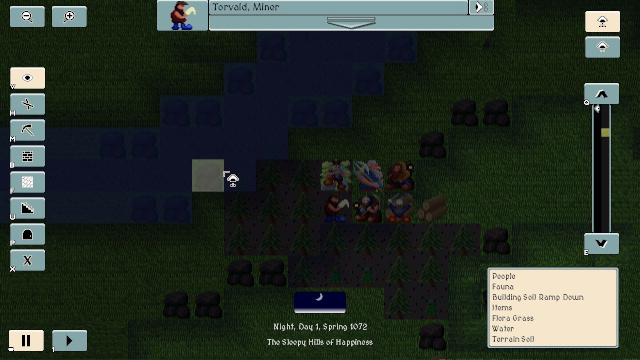 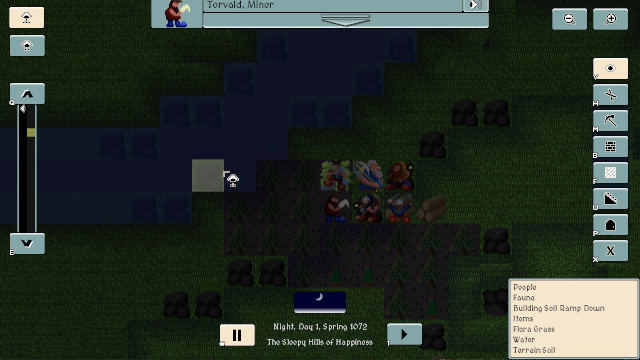 Let me know if you have a preference.

A while back I played around with a view-mode to show an elevation view of the world. I had another look at this while doing the view-modes, hoping to add it to this release. Unfortunately it requires a bit more work to have all the tools work. I imagine an elevation view will help with building stairs but I think I’ll leave this for the moment. It’s something I’ll ask about in play-tests and let me know if you’d like it.

While playing the game, and feedback from one play-tester, I feel like left-click and drag should always move the camera while right-click and drag performs the tool action. It’s just annoying having to switch between tools when designing a layout.

Release 0.7 includes a change to the job-system that may result in games from previous versions of the game to not load. If you have such a game please send it to me and I’ll fix it. Going forward I don’t intend to make breaking changes between releases but I chose this time because there are not many (any?) people playing. Maybe I should add analytics so I can answer that question.

For the next week I will: