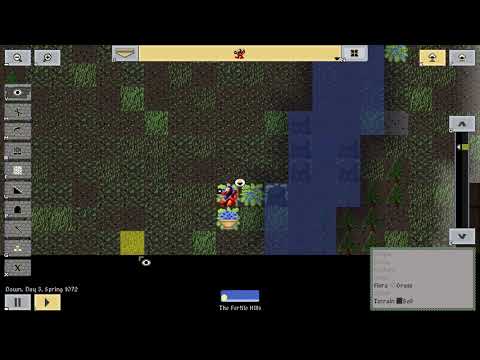 The week started with a handful of bug-fixes to make the tutorial more robust and conversations less repetitive. As conversations have been slowed down to allow for the audio, Dwergs will now leave conversations to do jobs. There’s still a lot to be done to improve conversations but it’s not a high priority at the moment. Eating and drinking are now accompanied by gulping, slurping, crunching and grunting.

The tutorial feels almost complete; locations are highlighted to show the user how to mine into the earth, build a door and lock it. The incentive for the player to do all this is the ravaging Dire Wolves that will munch any Dwergs they catch.

As well as recording his gulps, slurps, crunches and grunts, Frans has been replacing the synth guitar in his compositions with live guitar music. He complained that it was bloody difficult to play; it’s good that he’s challenging himself. Over the last few weeks Frans has made numerous recordings for ambience and yesterday trawled through them all to find the usable parts.

For the next week Frans will be doing combat, mining, building and Dire Wolf howls as well as recording more live guitar. I will be extending the Move tool to allow selecting and moving multiple Dwergs, adding a bear and letting the Dwergs sleep; they’ve been awake for over two years now, they deserve a rest.