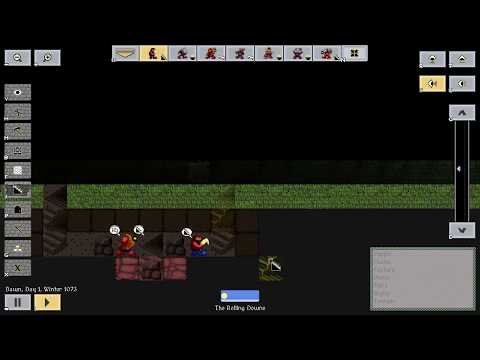 In my head, adding an elevation view is simply applying a transformation matrix between the renderer and the core game. Before attempting this I decided to try fixing the levels control in the simplest way possible and then think about where the transformations would need to be applied to achieve the same result. I convinced myself that I could wrap the renderer in an object that would transpose Y and Z on locations as they were passed in and out. This didn’t work. I am now writing tests around expected behaviour in plan view, writing an equivalent test for elevation and fixing each problem as simply as possible. If I do figure out a better way to do the elevation view, the tests will be in place to verify the behaviour.

Half-way through the week I was distracted by the fluid simulation, something I love tinkering with. I thought it would be a great idea to fill the world with water and then let it settle, tracking rates of change until some minimum was found. Unfortunately the simulation isn’t fast enough for this to be done in world generation so I’ve left it on a branch for future Jock to figure out. Future Jock is a wizard at optimising.

In the audio department Frans has been making mining, farming and harvesting sound effects. Work on ambience continues with the water ambience being tied to the amount of visible water and the types of birds singing varying according to the time of day and night. Music composition and recording continues with a live guitar recording replacing the synths in the battle music.

Ten-percent time is something I’ve enjoyed and benefited from at companies I have worked at previously. As our only company value is “Know yourself” I’ve expanded the concept to allow for any activity that is self or career improving. In his spare time, Frans has been working on an entry to the Chelsea Mix Contest, held by Rate My Mix, which he finished on Monday, check it out!

I’ve decided not to seek funding from a publisher at this stage because the game isn’t fun and the risk for a publisher is too high. I’ll reconsider this when I have something that is fun and statistics to back that up.

A few weeks ago I made a lightning talk for EdIndies which is now up on the brand new EdIndies YouTube channel. In it I talk a bit about how I’m using AWS and my development process. There isn’t any lightning and energy levels are distinctly lacking.

For the next week I’ll be finishing up the elevation view and letting the Dwergs get some well-earned rest. Frans will be recording guitar for the winter music and doing some more work on the seasonal ambiences.