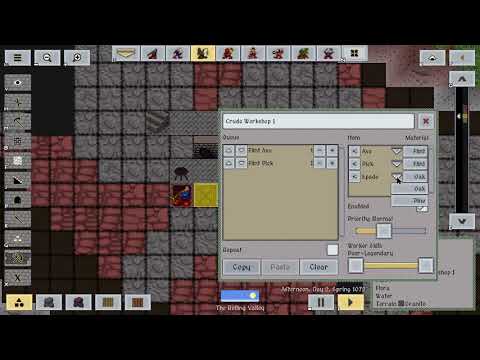 I woke on Thursday morning with a fairly clear idea of how workshops will be built in the game and how the placement tool will work. Finding good, clear mechanics in what at first appears to be a difficult task is a hugely rewarding part of development. By 4pm I had figured out how placement and rotation will work.

Then I got working on having the Dwergs build the workshop. Workshops are made up of a number of buildings so I was able to re-use existing building-construction behaviour and then link each building to the workshop as it was completed. I was excited to be making good progress and pressed on with having Dwergs craft some items in the workshop. Unfortunately, as is so often the case when I get excited, I was working into the night, getting tired, losing discipline and not writing tests.

On Friday morning I took a step back and decided to put crafting items on hold while I wrote tests around placement and construction. This was a smart thing to do as it uncovered a number of bugs.

On Sunday, instead of continuing with crafting items, I started on the workshop UI because I felt that this would influence how crafting jobs are created. The workshop UI works much like the stockpile UI so I made good progress with this and by the end of Monday I had all the parts working; a list of items that can be added to the work-queue and the option to choose the material the items are made from.

On Tuesday I took a break to help out a friend harvesting some real-world hay. Good thing too as there was a big storm on Tuesday night.

For the next week I’ll be finishing the crafting of items in workshops and looking at the first level of monsters encountered underground.