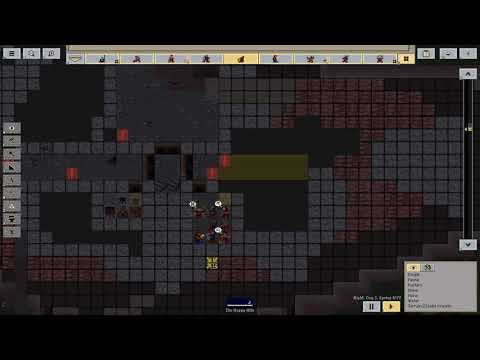 A bug-fix release this time and the first bug is the mining bug. The bug is with the mining tool, dragging out an area that starts on flat terrain and ends on flat terrain on a z-level below, creates jobs that cannot be completed. It makes me ask the question “As a player, what am I trying to achieve when I do this?” and the answer is “I want to dig a trench down this hillside.” I started work on this last Friday and because this is a tool I don’t write tests first, I want to feel what the tool feels like and I’m not sure of the best way to achieve the result. I start by adding a new mine-trench tool which almost works except it requires switching between it and the existing mine-pits tool while selecting. The system doesn’t support this so I have a think and on Saturday afternoon I have a simpler solution using the existing mine-pits tool. On Sunday morning I playtest, refine and add tests.

On Monday I fix some minor bugs with the workshop and volume tools and then get distracted by Wordle. I’m play-testing my long-running game in the evening and notice a rather distressing bug where Dwergs are getting stuck even when there is plenty space for them to move around. 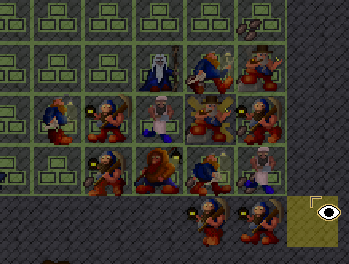 I spend much of Tuesday experimenting with improvements to path-finding and detours before realising the bug is with the stockpile-jobs. All the Dwergs in this picture are trying to move the same item from one place to another and naturally they get in each other’s way. This isn’t an issue with smaller clans so I only need to address it before clans can get larger.

On Tuesday evening I’m looking at the Mac resolution bug; the display resolution is too low when switching to higher, retina, resolutions. I don’t see a bug with my code and on Wednesday morning realise it may not be possible to change the desktop resolution. Unfortunately this can leave Mac users with the game in an unusable state and it doesn’t look like something I can fix. It is possible to get out of the unusable state using the keyboard to navigate to the Video Options screen or by deleting the ~/.local/share/Haikuinteractive/Dwerg Saga/UserOptions.pb file.

Wednesday afternoon and I’m testing the networked game with three peers. I find a crash bug with workshops when they extend outside the map. This bug is in the last version and I’m disappointed it got through. I make a fix and then find on Thursday that it doesn’t occur in Release builds which is a relief. There is a performance drop so my fix sorts that out.

I’m doing the upgrade-path testing and I find a crash when loading the ore and bronze tutorial while it was in progress. The current fix I have handles incompatibilities on launch by completing the script but I’m not certain there are no crashes while a script is running. The next release will have better script-version support. The Ink scripts will have a version tag and the stored progress will also have a version, if these don’t match the progress will be discarded.

After the Global Game Jam I will be fixing a few more bugs and defining the next feature.