Day one of the planned work and I’ve hit my target of one card completed, yay! I’ve not been able to make icons for each of the age-groups (Baby, Child, Adult, Middle-Aged and Old) so I’m showing these as text instead. The tooltip shows the Knowledge and Skill gain modifier applied for the agent’s age. 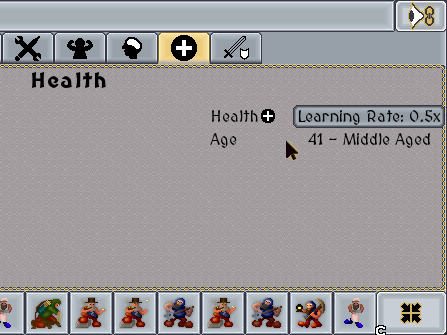 Aging is complete by the end of Monday and on Tuesday I add feedback to indicate how extreme a need is. 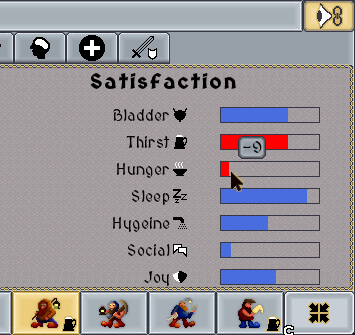 Mood Behaviours require changes to conversations to make some statements more likely when a Dwerg is looking for something to say. I make these changes on Tuesday and find I’ve finished the work I’ve planned for the week, so I’m just going to put my feet up.

Kidding. Previous measurements of my work suggest I complete one card per day on average but I suspect there’s a high deviation in that estimate so I press on with the next piece of work, Mood Behaviours. I find the feature is not well planned as there’s nothing concrete to test. I re-jig the feature to include Dwergs becoming Irritable when they suffer sleep deprivation.

Since my Masterclass subscription ended I’ve spent my breakfasts watching the Roguelike Celebration talks. There’s a good variety of talks and a number on procedural generation that I’ve found useful. The Algorithm, in its infinite wisdom, recently suggested Tynan Sylvester’s GDC talk on RimWorld. It’s an excellent talk and I’m finding it useful to frame Dwerg Saga as a game that generates stories rather than a tool to learn about oneself.

On Wednesday I’m writing the template that will define Mood Behaviours and decide to load these from file. I’ve avoided doing this because I want my tests to run as fast as possible. I still have a single template defined in code that tests use but this is replaced when the full game runs.

I make good progress on Thursday morning with “lack of sleep causing irritability” but hit problems with my implementation in the afternoon. I take time out to rest my brain playing Rift Wizard but have re-worked it by Friday afternoon and feel confident continuing with it today.

For the next week I’ll be widening my search for a QA contractor, finishing Mood Behaviours and starting on Rooms.