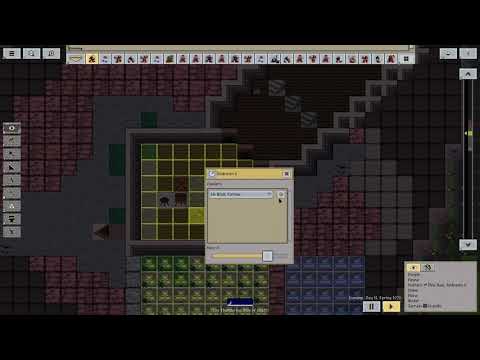 I finish the Behaviour changes by the end of Sunday. Temporary Skill and Characteristic modifiers are shown on the UI. The temporary icon needs a bit more space and an indication that it’s a negative modifier but adding that space will impact other areas so I’ll leave it for now.

I start on creating Rooms on Monday morning and because I can do this without running the game I make good progress. I’m stalled on Tuesday with the question, why are their Workshops, Rooms and Stockpiles? From the player’s point of view they should be as similar as possible. Workshops require buildings and when built they provide jobs and produce items. Stockpiles don’t require any buildings but provide jobs. Rooms require buildings but don’t provide jobs, they are mostly used to satisfy needs.

By Thursday evening I have built my first bedroom and it is highlighted in-game when the cursor moves over it. I hope to start on the Room Panel on Friday but spend the morning resolving issues with interactions between stockpiles and rooms. The Room Panel is now almost complete but I’m finding bugs, so Dwergs won’t be sleeping in their bedrooms until next week.

For the next week I’ll finish the Rooms work, get the Dwergs sleeping in their bedrooms and make a start on the Bladder Need.